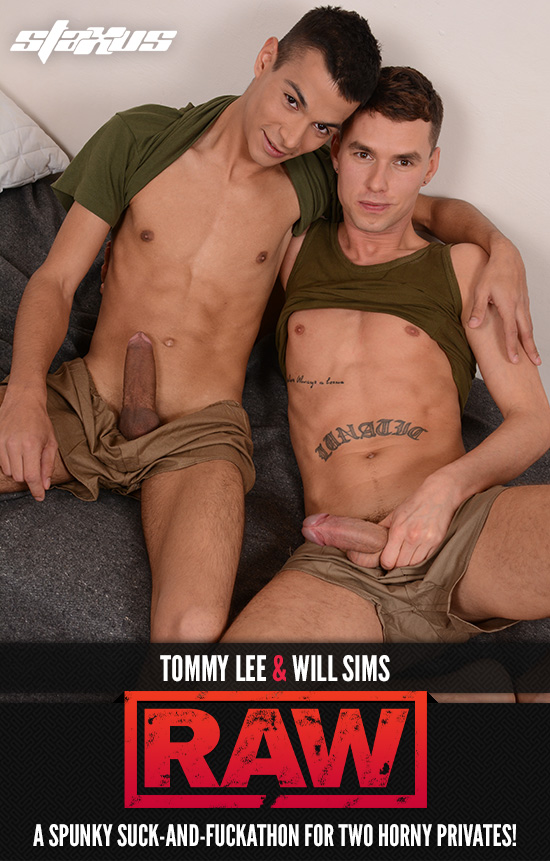 Thereâ€™s little hope of privacy in the army, so itâ€™s perhaps quite normal for young soldiers to spend their free time openly wanking off to porn. After all, all that pent-up testosterone has to find an outlet somehow! As such, Tommy Lee doesnâ€™t appear to show the slightest hint of surprise when he stumbles upon Will Sims sat on his bed looking at a magazine filled to the brim with naked girls. In fact, Leeâ€™s response is as cool as anything youâ€™re likely to ever witness, jumping beside his buddy and promptly manhandling Simsâ€™s dick in a bid to help in the relief effort!

Itâ€™s an offer that you might think a lad like Sims would refuse given his clear preference here for girls, but in a world where females are very much a rarity itâ€™s perhaps little surprise that the lad immediately returns the advance by allowing Lee to work his magic on his dark, aching shaft. Whatâ€™s more, itâ€™s not long before the fellow is responding in kind, heroically slurping on Leeâ€™s dick and (in the process) getting his buddy very much in the mood for something harder.

As such, itâ€™s no real surprise to anyone when Sims turns his attention away from Leeâ€™s cock to his ass, culminating in him thrusting every inch of dick that he can muster deep into the ladâ€™s raw hole. What follows is a terrific, ball-bustinâ€™ set-piece thatâ€™ll appeal to anyone who loves man-on-man sex in the military, which eventually culminates in both guys lying side-by-side in order to jerk out a couple of healthy loads of baby-goo! Your spunky satisfaction is guaranteed!

Get the full length video at Staxus